As America climbs out of the COVID-19 pandemic, cable's broadband networks continue to prove their ability to handle unprecedented spikes in internet traffic—from the state lockdowns of last spring when more people than ever before connected online, to the present day as businesses and schools begin to experiment with new hybrid working models. But no matter what the “new normal” will be, one certainty is the importance of a reliable and robust broadband connection.

As we step back and assess how networks handled the pandemic surge in traffic, a new report by Cartesian, a consulting group with expertise in telecommunications, shines some light on how traffic flows over the network, how much bandwidth popular applications utilize, and how multi-person household needs vary depending on usage patterns. The full report can be found here.

1. Asymmetrical Bandwidth - Most common household applications use much more downstream than upstream bandwidth

Despite video conferencing using higher upstream bandwidth than other applications on a relative basis, it is still a small part of overall data usage of the internet on an absolute basis. The biggest user of internet bandwidth is video streaming—more than half of total global traffic. 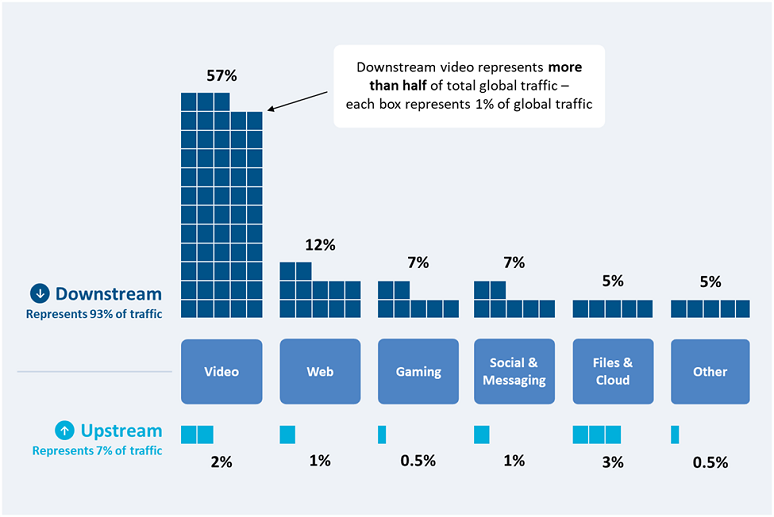 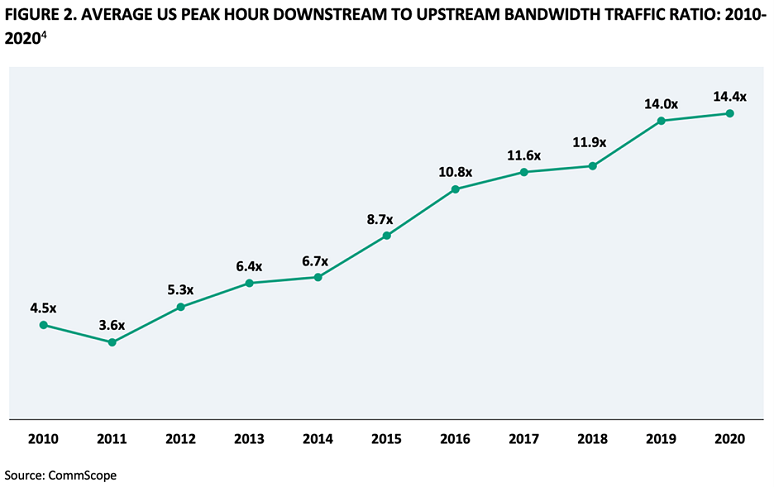 2. Multi-device scenarios show modest increases in bandwidth usage and do not reflect increases in consumption that are strictly additive

The tests were done in homes with multi-device usage scenarios including entertainment and video conferencing. These scenarios were designed to represent demand for up to four simultaneous video conference calls running in a household, as 90% of U.S. households are comprised of 1-4 members.

The average bandwidth consumed in these scenarios was lower than what would be expected based on collectively summing each application’s standalone recommendations. These findings suggest that many factors beyond the number of applications running—such as hardware, operating systems, network conditions—can influence actual bandwidth requirements. The amount of downstream and upstream bandwidth required to participate in typical and even very active video conference calls was modest and well within the range of all current broadband service tier offerings.

To clarify, applications behave differently when used simultaneously by multiple people in a home as compared to individually, and oftentimes only require moderate bandwidth speeds to carry out common household activities.

3. Applications adapt to the available bandwidth 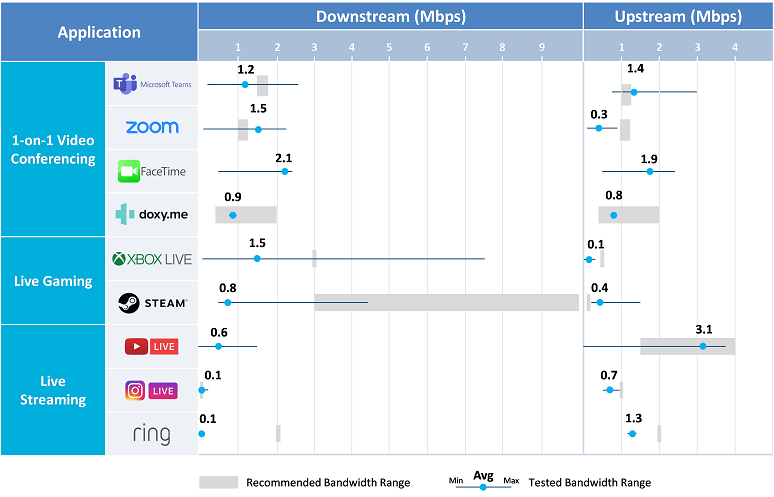 This means that video conferencing applications can properly function at lower levels of bandwidth when there are constraints, often with no perceptible reductions in quality. Live streaming applications such as YouTube Live require more upstream bandwidth than downstream due to the fact that the user is streaming live content upstream to the internet. 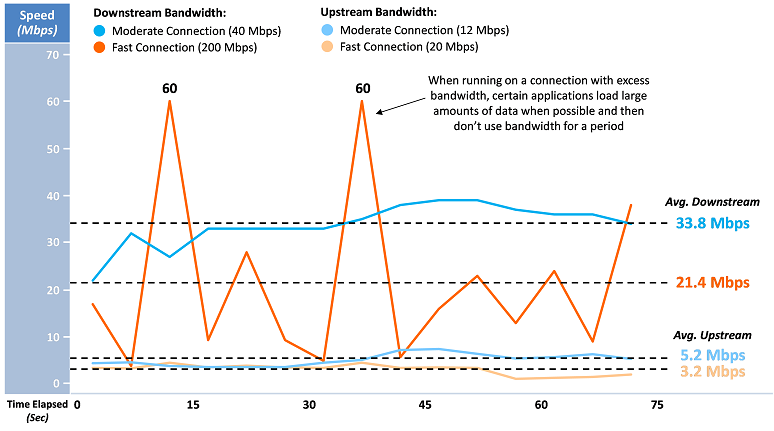 In effect, applications adjust their bandwidth usage in response to changing network availability. The Cartesian tests reveal that lower bandwidth was typically needed than was recommended by the application publishers.

In line with recent technological innovations, Cartesian found that applications tended to adjust their bandwidth usage in response to changing network availability. Single-application tests also commonly resulted in lower bandwidth needs than recommended by the application publishers. These efficiencies were also observed in multi-device scenarios, resulting in moderate bandwidth consumption overall, and all scenarios tested required bandwidth levels that fall within the range of speeds commercially available to most U.S. households.

The real-world scenarios tested under this study provide important data demonstrating how broadband capacity is actually used in environments where multiple applications may be in use at the same time. In addition, the data further highlights the benefits and efficiency of asymmetrical service offerings where faster downstream speeds are a closer match to the significantly larger amount of downstream traffic generated by typical consumer usage. As the cable industry continues its work to build robust, scalable platforms that meet consumer connectivity needs today and will be ready to serve our multi-gigabit future, it is contributions like this Cartesian study that will help us better understand how consumers use broadband today and where consumers will take us tomorrow.